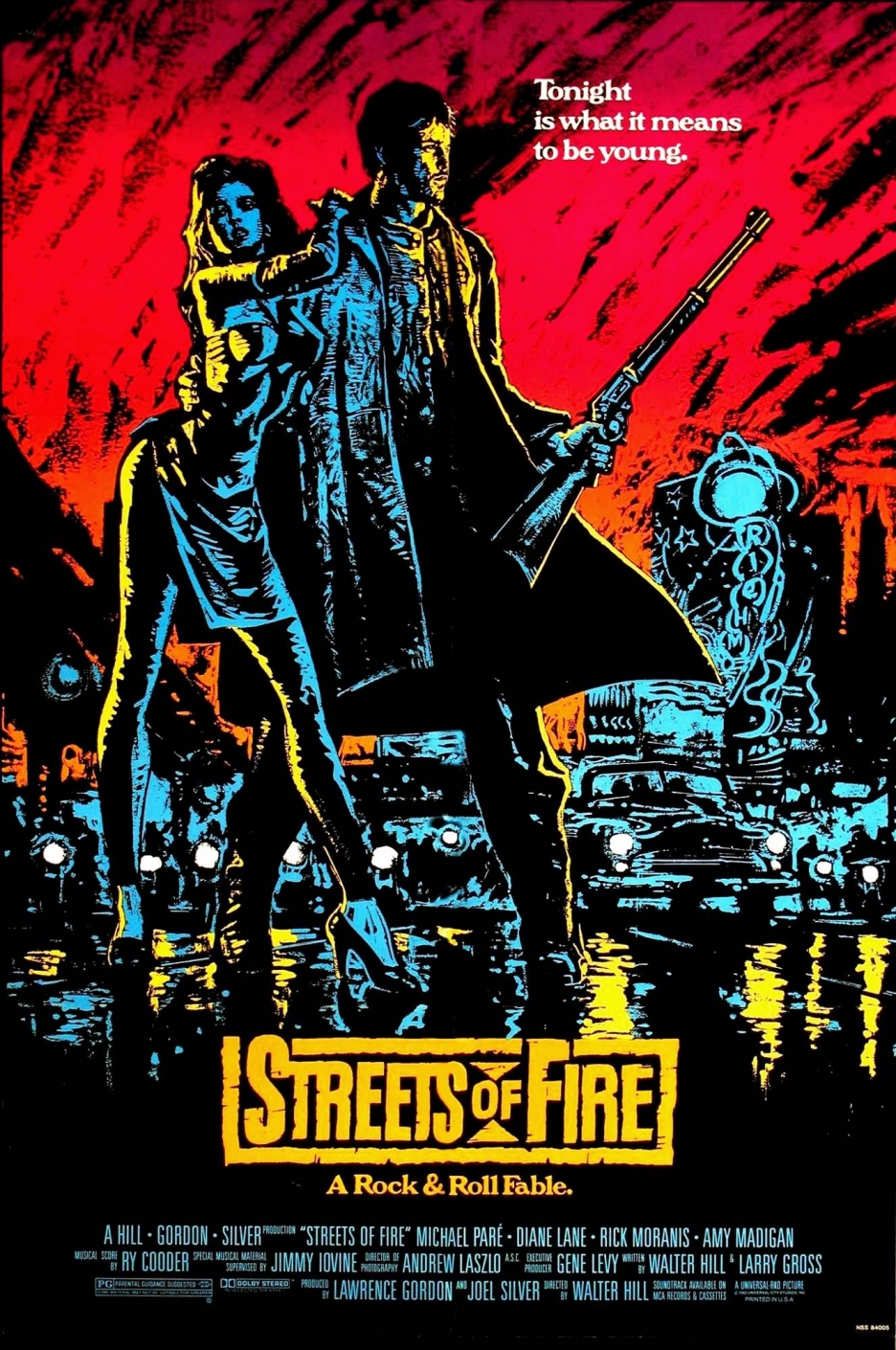 A mercenary is hired to rescue his ex-girlfriend, a singer who has been kidnapped by a motorcycle gang.

tags: Tonight is what it means to be young.

It would appear that before Michael Pare became an unheard of video star in the 90s he did actually have something of a big screen career once mainly in the shape of this Walter Hill fantasy adventure, Sin City 1980s style set against a colourful back-drop of a futuristic world laced with some sort of 1950s throw-back.

Tom Cody (Mr Pare) a mercenary for hire, is called back to his old home town when his ex-girlfriend (Diane Lane) is kidnapped by a gang of bikers lead by a younger Willem Dafoe. But finding her won't be easy and he'll need the help of an annoying, obnoxious Rick Moranis and the Real McCoy (Amy Madigan) a tough former soldier who drinks at his local bar. But even when girlfriend is rescued, it will still become a battle to see off the troublesome gang once and for all.

Bustling along with a hollering bar-room live band soundtrack and a faded out screen style of moving things along, Streets of Fire is a movie with a lot of style but much less substance, a colourful, lively but ultimately rather empty experience. Pare makes a fair big screen hero, Moranis puts his annoying nerd appeal to good use, Madigan is convincing as a tough chick and Dafoe is unrecognizable as the main bad guy but the cast certainly make it shine more than Hill does. *** Streets of Fire is directed by Walter Hill who also co-writes the screenplay with Larry Gross. It stars Michael Par辿, Diane Lane, Rick Moranis, Amy Madigan and Willem Dafoe. Music is scored by Ry Cooder and cinematography is by Andrew Laszlo.

When the lead singer of Ellen Aim and the Attackers is kidnapped by biker gang The Bombers, her ex-soldier of fortune boyfriend is contacted and hired to go get her back...

There were a couple of movies released in 1984 by maverick directors that were frowned upon at the time, but are now significantly held in high regard and define the saying "cult movie". One was Alex Cox's Repo Man, the other was Walter Hill's Streets of Fire.

Streets of Fire is a bastard hybrid of ideas and influences. In part a rock opera set to the backdrop of blink blink blinkity blink neonvillle, an unnamed place that lives and breathes between 50s angst and 80s futurism, in others it's a straight forward road/mission movie headed up by an anti-hero taking notes from Snake Plissken whilst jostling for cool space with Kyle Reese. It's a film, that by Hill's own admission, is unashamedly a collage of things he finds cool in cinema. Yet this is not a detriment to the pic, the narrative is straightforward as can be and Hill throws everything he can into the mix, and it works.

In essence it's a live action comic book, it knows it's just a film and has no pretencions to seem remotely real life. The look is wonderfully flamboyant and campy, where the hero and villain wear braces and PVC overalls respectively. The girls are a mixture of a teenage diva babe and a beer swilling roughneck babe. The city itself is a vibrant mix of colours and carnage, beauty and beats, and where the streets literally are on fire. Hill weighs in with his adroit flair for action, always kinetic, while the soundtrack rocks and the dialogue bubbles with self aware glee. Cast are super, some sexy and tough, others weaselly and weak, but all pumping the pop culture blood through the veins of the movie.

With style and cool to burn, both only beaten out by the action quotient, Streets of Fire is an ode to live action fun. And watching it now you can see just how it has influenced many a film maker post its release. Streets of Fire, one bad ass bitch funky sex machine. 9/10 Very of its time but enjoyable for all that. The film was created with the intention of being the first in a series of three. Sadly the terrible commercial response to 'Streets' eliminated any possible continuation. Despite frequent requests from hardcore fans, there is little chance of any sequels seeing the light of day. Perhaps due to the fact that the part had originally been written for a man and was only slightly modified after Amy Madigan expressed an interest in playing the role, this has become one of the most frequently debated topics on these boards and sadly there is no definitive answer. Both sides of the argument can quote dialogue that they feel proves their point but no one involved with the production has ever truly taken a side to either confirm or deny the characters orientation. It is simply left for each fan to decide for themselves. However, throughout the film, McCoy smokes cigars. In the old days of Hollywood, this was a visual code that a woman was gay. Hill likely added this as a knowing wink to older viewers.